It has been a long and tumultuous series which started with Brian, the victim of some unfathomable corporate bureaucracy, finding himself irreconcilably in skirts. The only direction was down, and what an irreverent fall it was, his body and mind irrevocably changed to the irrepressible whims of his irredeemable boss, Mr Banyon (I am sorry if you find my discourse irritating).

But then Mr Banyon found himself on the opposite end of the spectrum, with none other than Brenda (neé Brian) to administer his punishment. While it seemed at first that our Brenda was reluctant, it came to pass that perhaps she was not all that innocent. In fact, through a series of deft and cynical moves, she managed to bring Bambi (neé Mr Banyon) under her sharp stiletto heel, with Mistress Alexa next in her crosshairs.

Was Brenda successful in her grandiose plan? Well, 58% of you told me she was… so then I suppose that it’s true then. But I do not like it (insert: frowny face). Mind you, I am somewhat flattered, that some of you may have figured that storytime Brenda was a surrogate for me, but I’ve told you once, and I’ll tell you again: I hate, hate, HATE it when the hero/ine wins!!!

Having said that, there is something to be said for growth and empowerment, which are messages that many of us (me included) would be wise to internalize. In any case, I am a sissy of my word, so here you have it, the final chapter of Brenda’s revenge: 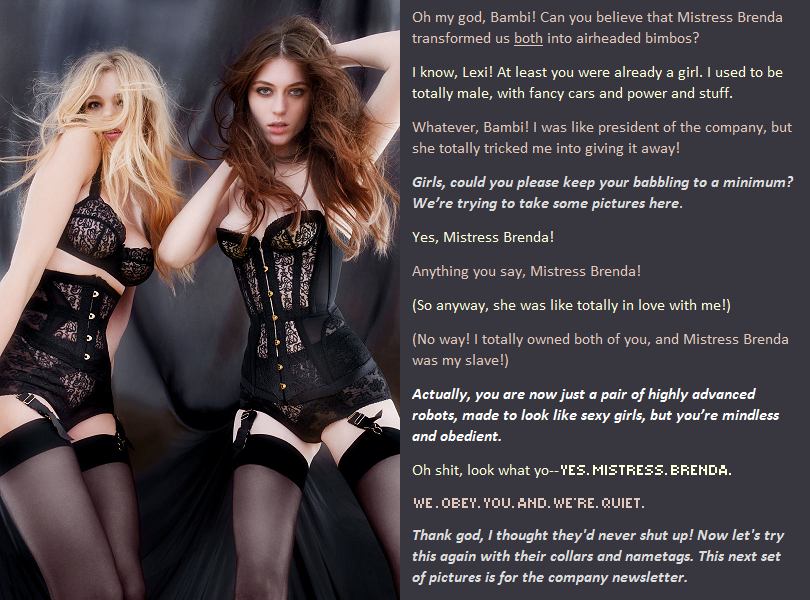 Wait, wait, wait! Hold on there just one moment! Some of you young’uns may not know me so well, but it’s hardly my nature to end things like that! I mean, why do one ending when you can do two? You see, while I may indulge your frivolous votes, mine was for the Mr Banyon ending. In fact, it’s the only ending that I ever really envisioned.

You see, what is the point of irreversible (sorry) brainwashing if it turns out to be, well… reversible? I wrote this story to explore just how far, just how deep Mr Banyon could delve into Brenda and make her his own. It’s like, he completely razed the field of her psyche and locked an impenetrable iron sphere around the core of her being. From there, he grew a new garden more to his liking.

So, even though Brenda may have flowered, there remained an essential element of control that could not be broken, unless you razed her completely again (which I would not recommend: I do not think her psyche could take it again, and cracking the sphere would probably damage her core). Perhaps you feel differently? Let me know what you think after reading this alternative ending: 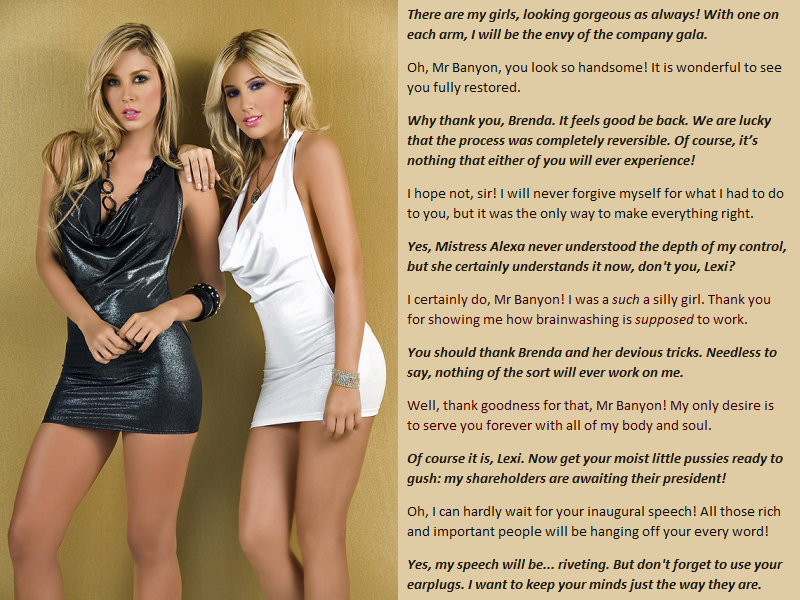 And why do two endings when you can do three? A significant number of you voted for the Mistress Alexa ending… so why not share that one as well? It seems plausible to me that (a) she was too smart to be easily outsmarted, and (b) her own brainwashing devices would not work on her, which means she was only playing along with Brenda to see how far she intended to go.

Perhaps some you voted this way because you saw this logic, or perhaps you just wanted to see a dominant woman in charge… or some other reason? Irregardless (ha, ha! Not really a word!) I do believe that she had genuine feelings for Brenda, and she must have felt soooooo hurt by her betrayal. Alas, behold the fury of a woman scorned: 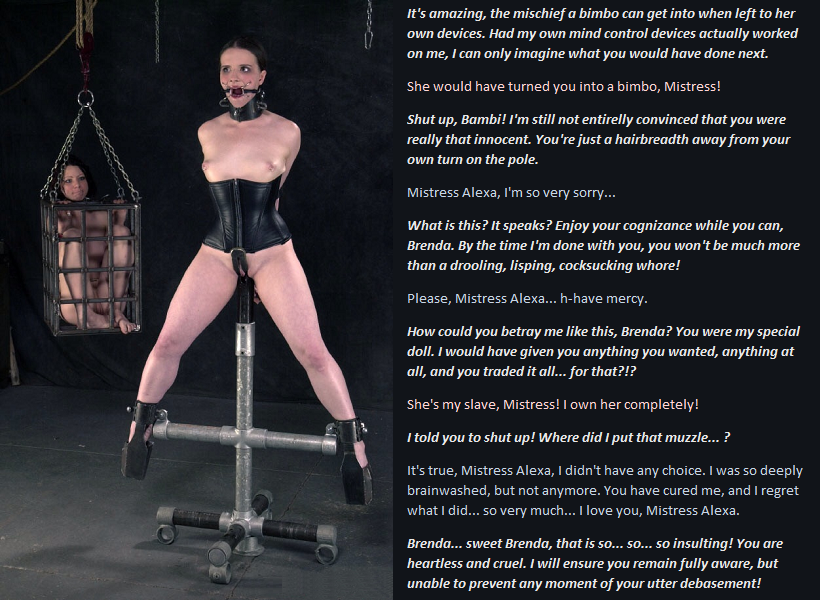 Okay, folks… that’s all for now! I hope you have enjoyed the Mr Banyon saga. I do not envision any third part (at least not anytime soon) but if it happens, I shall respect your votes, and continue from the “Brenda on top” angle. In the meantime, I’ll be posting a mixture of new and old stuff in the days and weeks ahead. I have been experimenting with some new approaches that I would like to share with all of you, and I’ll also be throwing in some vintage and “little-seen” captions.