Do you remember those tales of ships at sea, comprised entirely of males, as they were at the time, how certain among them were chosen to serve as female companions? I used to spend some time imaging those bygone days… fantasizing.

I suppose that prisons are similar, but ships are far more romantic. One might also imagine the ship crashing on a faraway isle and such arrangements becoming more twisted and permanent… but I digress. I want you to imagine instead that all of these men wanted to be the woman.

That is kind of how we are, just ourselves, with nobody else to play our darkest dreams and fantasies… except it’s more that we’re each on our own deserted island, communicating to one another with floating bottles and such.

Yes, yes, yes… I can hear all your arguments, but I urge you to forget them. I know there are exceptions and details and blah blah blah, but the sooner we accept the fact that we are alone, the better. Alone, with each other.

So listen to my tales, with which I hope to amuse you! To be precise, I am launching a “Sequele in Seven Partes” as my seaborne ancestors would declare. Tis the story of our poor hapless Brenda and her sadistic Mr Banyon, but now we see a new player has entered the stage!

Oh, what trials and tribulations are to follow? Is this just another long rambling piece going nowhere, or is it in fact a well-structured story with ethos and pathos, twists and turns and a hair bending ending? I would posit the latter, but really there is only one for you to find out… 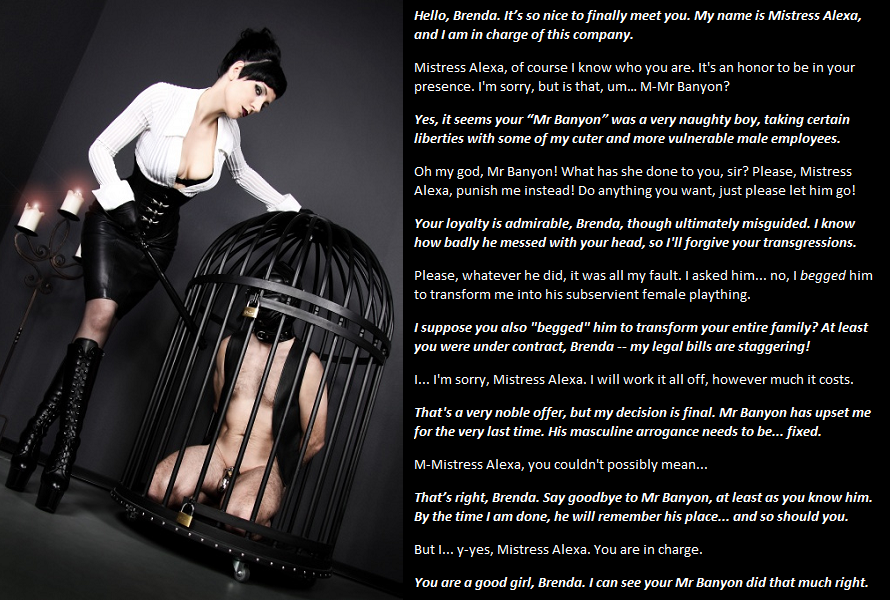