Nothing More, Nothing Less 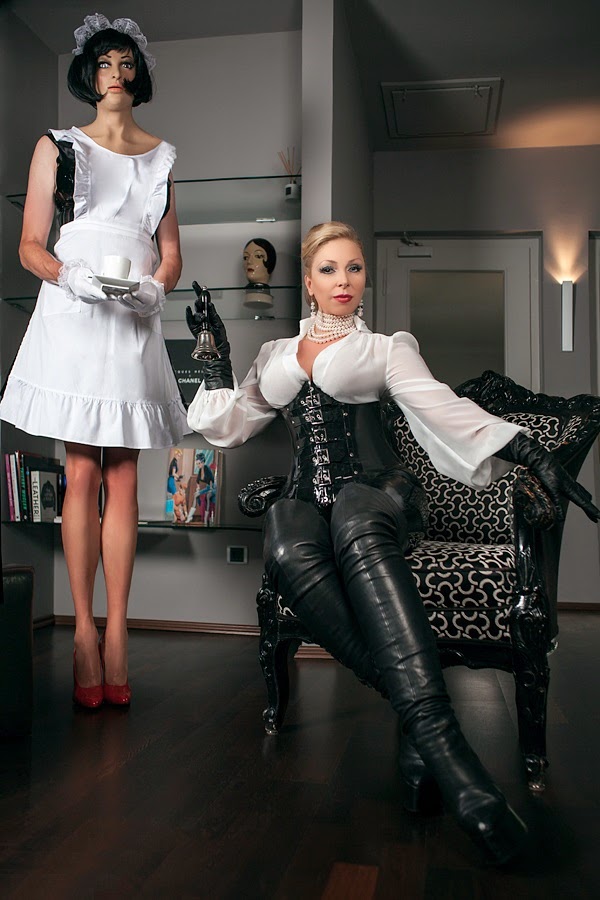 “No, thank you… I’m fine,” Sarah rasped nervously. She really could have done with a cup of tea, but damned if she was going to accept a single drop from this woman, or anything else for that matter. “I must insist that we get straight to the issue at hand.”

The issue, of course, was her husband, David, whom she recently learned was spending an inordinate amount of time with this… prostitute. She was not fooling anyone with that garish costume, least of all Sarah. True, the apartment was posh, but it was just a veneer, like everything else in this sleazy affair.

“Are you sure,” the woman queried, pretending not to notice the obvious distain emanating from her guest, “but you will not mind if I have some myself?” She rang the bell in her leather clad hand, just once, and then set it back down on her lap.

Sarah cleared her throat. “Sorry… Jezebel, was it? I don’t mean to be rude, but I honestly don’t buy into any of this ‘lifestyle domination’ nonsense.” She was surprised at her own directness. “As far as I’m concerned, you’re simply the woman who’s been screwing my husband.”

Jezebel smiled, as though she was indulging an impudent child, “I can assure you that nobody is ‘screwing’ anyone, Mrs Taylor. I understand your confusion, given the circumstances, but while you are in my home, I would ask that you respect my title.”

Sarah was astounded. This harlot, this woman who stole her husband, just reminded Sarah to address her as Mistress. “Listen up, you whore…” she started, when, as if on cue, a servant entered the room. How cute, Sarah thought to herself, she even has a cross-dressed maid.

“Thank you, Davina,” said the Mistress, without breaking her smile. The maid stood calmly by her side, a ridiculous sight, the picture of mindless obedience. “Unfortunately, I have lost my taste for tea, but I think our guest might volunteer to return it to the kitchen for you.

“Ha!” Sarah could hardly contain her astonishment, “You have some lot of nerve if you think that I… I…” it was then Sarah realized that the maid, underneath his wig and layers of makeup, behind that cold vacant stare, was her husband. She could barely draw out his name: “D-David?”

“So now you see what this is really about,” Mistress Jezebel gloated, “and what David has been up to these past several months. Between our lengthy sessions and my… unique methods… I can assure you that he’s totally mine.”

The hapless wife gaped for what seemed like an eternity, searching in vain for a glimmer of recognition her husband’s face. “David, wake up!” she barked, “I’m taking you home!” But the maid would not budge. It was almost as though he was no longer human.

“Davina made his decision,” the Mistress explained, toying with the hem of his skirt, “not that he ever really had one… I am offering you a choice,” she smirked, brazenly stroking his smooth hairless thighs, “simply do as I say, and he shall go free.”

Sarah’s mind was spinning cartwheels: David must have been tricked, or brainwashed somehow, he never would have consented to this deplorable travesty… or would he? None of this made sense. The devious bastard, I ought to let him rot… but what if he was innocent?

The maid stepped forward and offered the cup to Sarah. She hesitated, hoping for a surreptitious wink or some other sign, but there was nothing. “There is no need to wash it, just give it a rinse,” the Mistress instructed, “Davina will show you the way to the kitchen.”

Sarah glared at her tormentor, but quickly thought twice about her response. This woman, she was holding all the cards, and Sarah had to learn the truth. She took the cup, visibly seething, her words dripping with venom, “will that be all… Mistress?”

“Oh, hardly, my dear,” Mistress Jezebel laughed, “I am afraid this is only the beginning. When you are done with the dishes, Davina will find you a uniform to wear. It is standard issue, I’m afraid, but it will have to do for now.”

“Y-you couldn’t possibly mean… “ the girl stammered, porcelain cup trembling in her hands. What else could she do? It was clear that this woman was not interested in negotiating. She could still run away and abandon her husband… but then what would happen to him?

“I am presenting you with an opportunity to redeem yourself,” the Mistress explained, “as rudeness towards me is simply not tolerated. We will talk more, when you are suitably attired, but in the meantime, you would do well to show your appreciation.”

“Yes, Mistress Jezebel,” the girl forced a smile, the best and brightest she could muster. I will play your game for now, she fumed, but the instant you let your guard down, I am leaving with my husband! Sarah held her breath and performed a delicate curtsey. Mistress Jezebel nodded with approval.

Sarah spun on her heels to complete her first task. She felt almost sorry for the poor deluded Mistress. Yes, she thought, rinsing the cup, I will just play along, nothing more, nothing less. She could barely keep herself from giggling at her ridiculous situation.

Her reverie was broken by Davina, standing in the doorway. This was her chance: “David,” she hissed, looking deep in his eyes... her thoughts trailed off. Those eyes, they were fathomless! Everything she wanted to say seemed less important somehow, less urgent.

His eyes conveyed a peaceful serenity that was remarkably rich and complex. How come she never noticed this before? It must be so nice to live in the moment, without a single care in the world. She offered her hand to lead him away, but found herself following instead.

The maid led Sarah into the next room and quickly stripped her naked. Well, it's not quite like our wedding night, she joked to herself, but then she felt guilty for mocking her husband. Sure, their marriage had problems, but she always stood by her vows, to love, honor and...

"Oh," she gasped, as the maid's dress came down over head. It caught her by surprise, and she snapped back to her senses. This was a mistake. What was she thinking? Sarah started to panic as David proceeded to tie an apron around her back. She had to leave this place right now!

David, what are you doing?” she yelled, except she didn’t really yell, or even say a word. She stood perfectly still while David layered makeup onto her face until it resembled a mask. As a finishing touch, he pinned a lacy white cap atop her head.

Sarah caught a glimpse of herself in the mirror and her heart nearly stopped. This reflection… was her? “Sorry,” said David, snapping his fingers, and a dozen flashbulbs went off inside her head. By the time she refocused, her husband was gone, and so were all her possessions.

“This is… n-no…” her thoughts were returning, but they were quickly interrupted by the ringing of a bell. She blanched: Mistress Jezebel was waiting! The bell rang again, and she rushed down the hallway as fast as she could.

“Oh, there you are,” the Mistress droned sarcastically, “I thought there was something wrong with my bell… I simply can’t imagine what took you so long!” She paused, genuinely concerned, “are you feeling alright, Davina? You look a bit flush.”

“Da-Davina?” she stuttered, scanning the room for her husband, but finding no sign. She looked down at her body and touched her flat chest: What? How? Her hands darted down between her legs where she found a tiny cock wriggling in its cage.

Mistress Jezebel raised an eyebrow. “Now, if you’re done with your little burlesque show, we need to talk about what happened here today. I just saw your wife running out my front door,” the Mistress scowled, “obviously, I’m disappointed, but really not surprised.”

“My… wife...” the words came slowly, as though she was stalling for time. It suddenly occurred to her that nobody knew where she was. As far as the world was concerned, Sarah was fine and on her way home, not trapped in a body that wasn’t her own.

“Yes, she seems to have abandoned you, despite my strongest enchantments, and I cannot help but think that you had something to do with it,” her eyes gleamed mischievously, “so you will be punished twice: once for your own infraction and another for hers.”

“M-Mistress Jezebel…” she tried to explain, but stopped. It was strange how this almost made sense to her. This had to be a dream, she reasoned, I will just play along: nothing more, nothing less. She desperately wanted to cry, but her body seemed incapable.

“You shall become the very same thing that your wife dared to call me… a whore,” spat the Mistress, her upper lip curling with disgust, “and her memory will provide you no comfort, not anymore, because in your mind, she never existed.”

Davina stared ahead blankly, suddenly empty and utterly vacant. He could not remember a single moment from the past. All he had left was the lingering feeling that his body wasn’t his own: indeed, it belonged to his Mistress, to do with however she pleased.